For many years, the Rowley Shoals Marine Park has flashed like a shipping lane beacon in my brain, promising access to a reef so remote and ill-frequented that as few as 200 tourists a year arrive to indulge in its beauty. I ask myself what could possibly go wrong on an adventurous, 300-kilometre overnight steam from Western Australia’s northern outpost of Broome, leaving the shelter of shore and heading across the open Indian Ocean to one of Australia’s least frequented reefs?

Well, quite frankly, everything – if the weather turns bad, that is.

Which is exactly the reason tour operators typically only travel here between September and December each year, in a season known as the ‘doldrums’ (a period  of light winds and calm seas), to access pristine coral cays.

Inaccessible as a day trip, and off the radar to liveaboard vessels for most of the year, the Rowley Shoals Marine Park is made up of three perfectly formed atolls: Clerke Reef, Mermaid Reef and Imperieuse Reef, situated at the edge of Australia’s continental shelf. Thought to be virtually unchanged from when Captain Rowley first sighted Imperieuse in 1800, this well-managed watery reserve is largely protected from the pressures of fishing and human intervention.

Beginning my adventure in Broome,

Thankfully, our overnight steam is relatively calm, and we wake to the mesmerising opaline colours of Clerke Reef – exposed corals and lagoons of aqua are swallowed by the incoming tide, eventually providing enough water to enable our vessel to edge through a narrow passage, sandwiched by reef and flawlessly clear ocean.

It’s a spectacular entrance, eagerly devoured by all above the water, even though we realise endless additional beauty lies below. 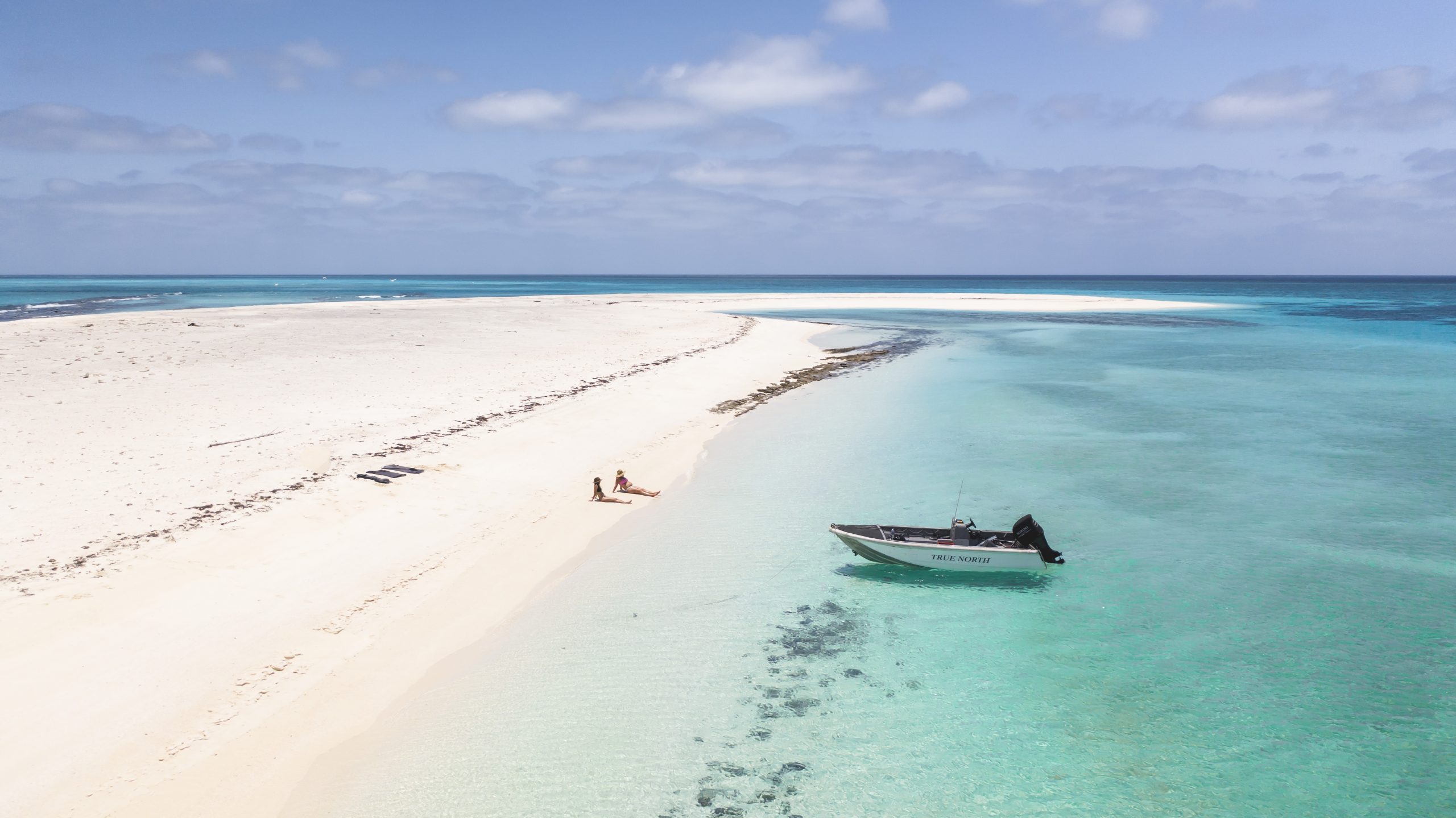 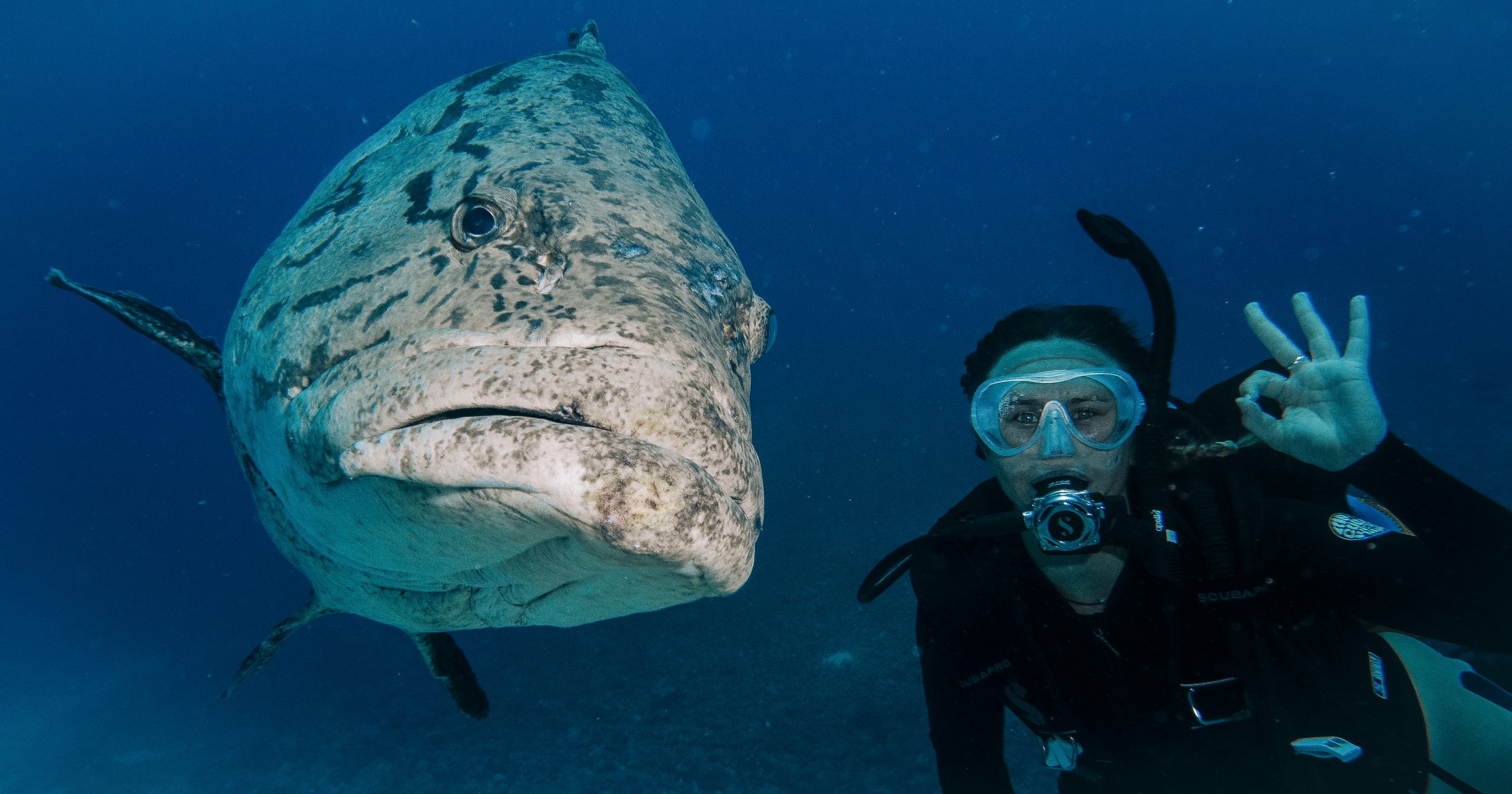 Home to 233 species of coral and 688 different types of fish, the Rowley Shoals is marine nirvana among divers and snorkellers. “This area is extremely unique,” says Chris Mirbach, our on-board marine biologist and dive master. “A lot of this has to do with the Indonesian through-flow. If you look at where we are situated, the epicentre of the world’s marine diversity, Raja Ampat, is very close. “And if you check the currents, they drift straight down to us with all those tiny polyps that coral create, along with tiny fish. They all congregate here in this untouched reef system.”

Most of my diving is along Clerke Reef, its near-vertical outside walls rising from a depth of 400 metres and covering an underwater area spanning some 80 kilometres. I plunge to 30 and 40 metres, careful to watch my gauges as – with water visibility sometimes reaching an astounding 60 metres – it’s easy to stray.

At Blue Lagoon, I descend to meet the resident whitetip reef sharks and am instantly engulfed by thousands of schooling fusiliers. Amid a heavy surface current, we nail our backroll onto Plectropomus Pass, only to be streamed through the ‘pass’ at the mercy of a ripping current. This area is famous for its huge tides, creating exhilarating drift dives and snorkels.

At ‘Jimmy Goes to China’, the northernmost point of Clerke Reef, our dive takes us two kilometres in distance at a tremendous rate of knots. We effortlessly drift past colourful gorgonians, soft and staghorn corals. We fly over ancient bommies and pointed pinnacles, and cruise in the company of chevron barracuda and submarine-sized dogtooth tuna, which hang out beside reef drop-offs.  Snorkellers also enjoy thrilling drifts along the dinghy channels that lead into Clerke’s languid lagoon, steering over giant clams and an embarrassment of Moorish idols. 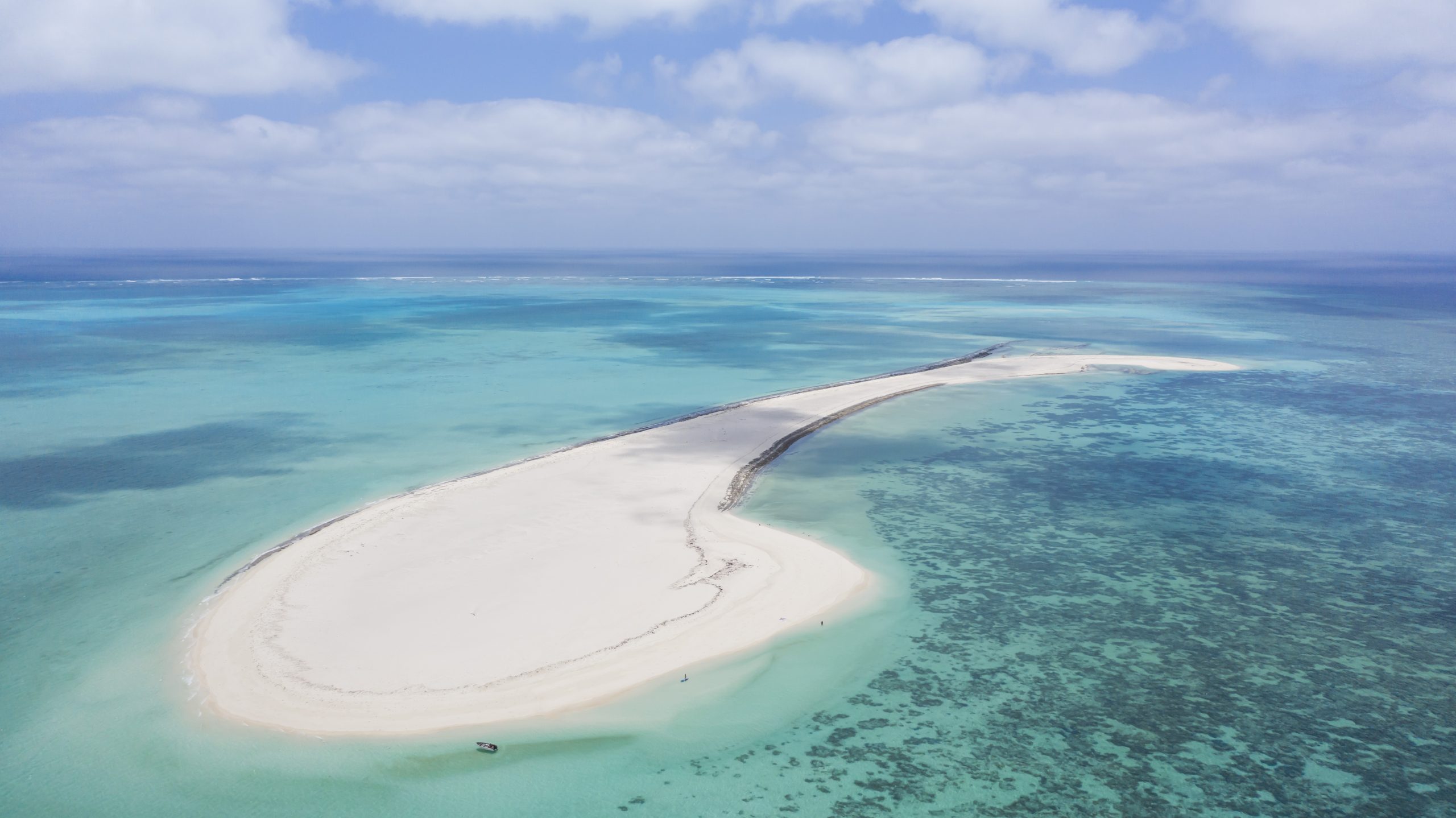 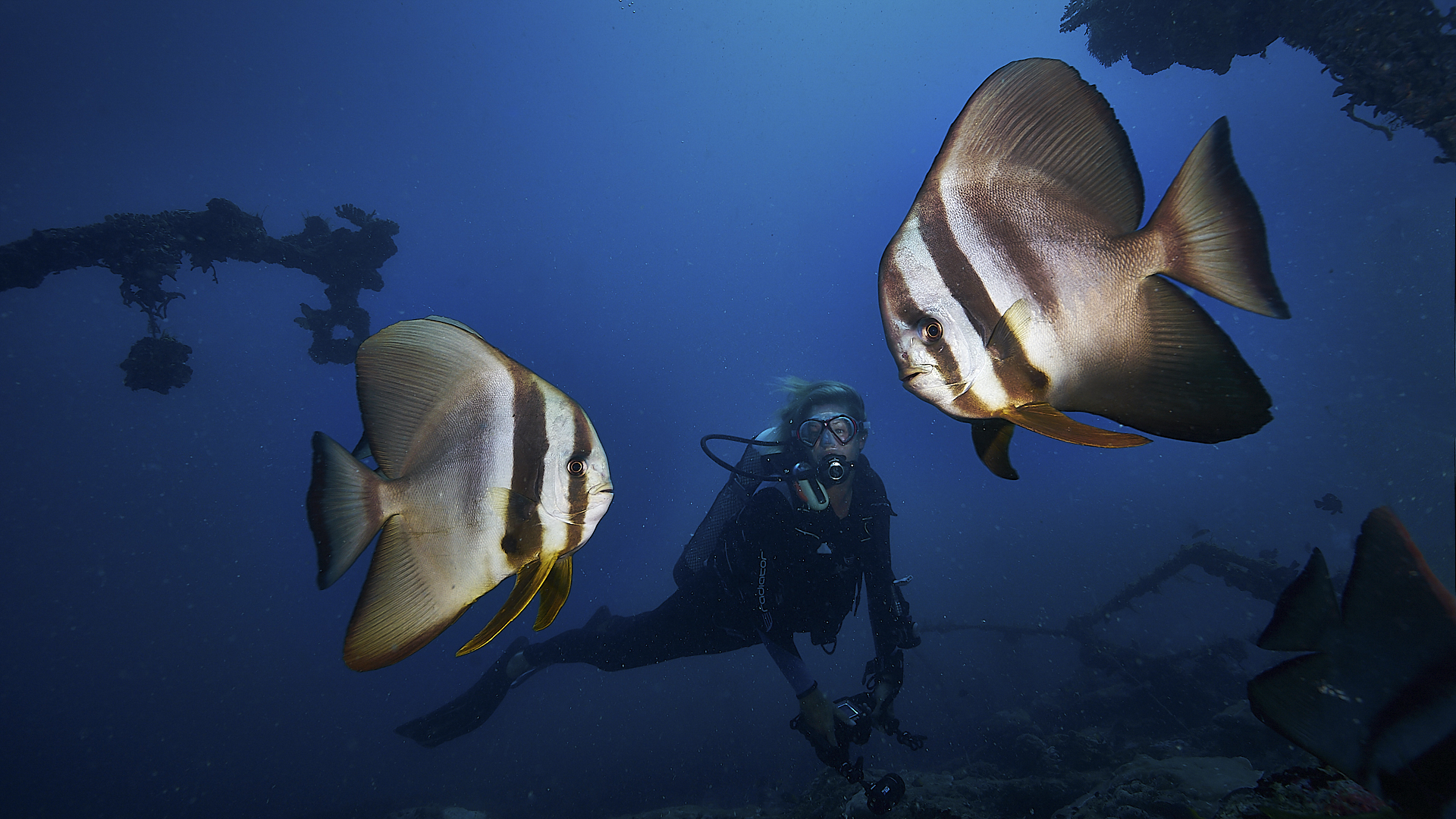 Not every dive is fast paced, however.

‘Sheer Delight’ is exactly as its name suggests: a gentle visual sensation that, at its end, opens to a sandyfloored amphitheatre which makes me just want to sit and sing.

On other outings I leisurely explore caves and swim-throughs where black trevally swirl; elegant longfin bannerfish laze; bumphead parrotfish and humphead  wrasse thrive; and hundreds of different stripes, dots, fins and pouts pass me by.

Thoroughly water-logged, it’s time to jump in tenders and cruise toward Bedwell Island, a deserted sandy cay surrounded by a gin-clear lagoon, and home to Western Australia’s only nesting population of red-tailed tropicbirds. Staff maroon us here in the afternoon sun, setting up a well-stocked bar, popping up beach brollies and handing out fluffy towels – there are also paddleboards to drift about on, should we wish. And in the distance is True North, the bruised end-of-day sky creating a halo of colour around her. 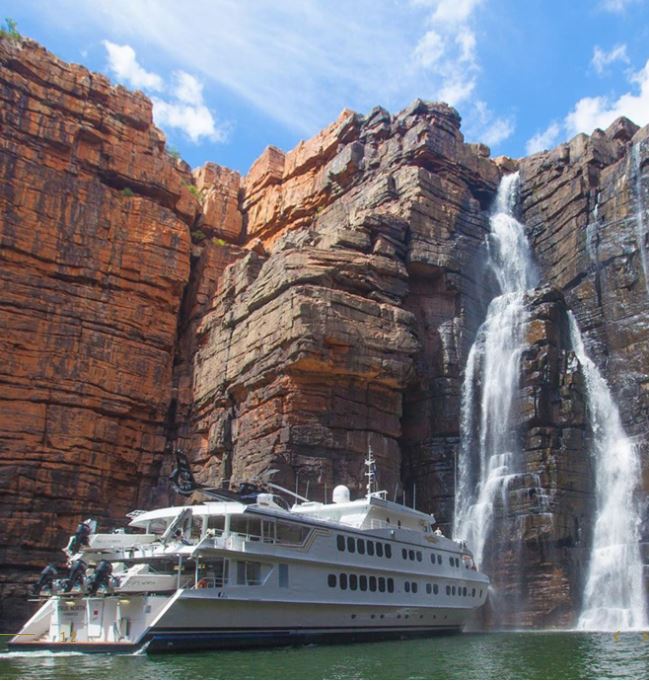 Luxury is no longer simply about spending money on beautiful things but instead an experience can now define luxury. This is what an adventure with True North is all about. Throughout history, the definition...

An almost forgotten chain of islands off the coast of Papua New Guinea holds a wealth of wonders for those who choose to travel there aboard luxury cruise ship TRUE NORTH, writes Roderick Eime. We are flying...