It’s now been just over two years since we successfully deployed the world’s first fin-mount satellite tags on whale sharks in Cenderawasih Bay – and with one of these original tags still transmitting, it seems a perfect time to reflect on what we’ve learned of these magnificent animals since launching Conservation International’s tagging program with the generous support of the True North and its wonderful guests!

As those who have visited Cenderawasih with the True North on the 2015 and 2016 itineraries know well, we’ve been able to directly attach these satellite tags to the dorsal fins of the world’s largest fish – allowing us to receive real-time position data on the sharks each time their fin breaks the surface of the water. Over the past two years, we’ve managed to deploy the custom-made satellite tags on twenty-two whale sharks in Cenderawasih Bay and more recently on five whale sharks in the Kaimana region just south of Cenderawasih.

Perhaps the most surprising finding has been just how differently each of these sharks has behaved. While we expected to see some “generalized tracks” of migrations of the sharks out of West Papua’s Bird’s Head Seascape, in reality every shark has largely done its own thing! Some have remained close to home, while one travelled over 5,100 km from West Papua – but each satellite track has revealed unique behaviors. Below we summarize our picks for the top 7 most interesting tracks from whale sharks tagged in the Bird’s Head Seascape over the past two years. 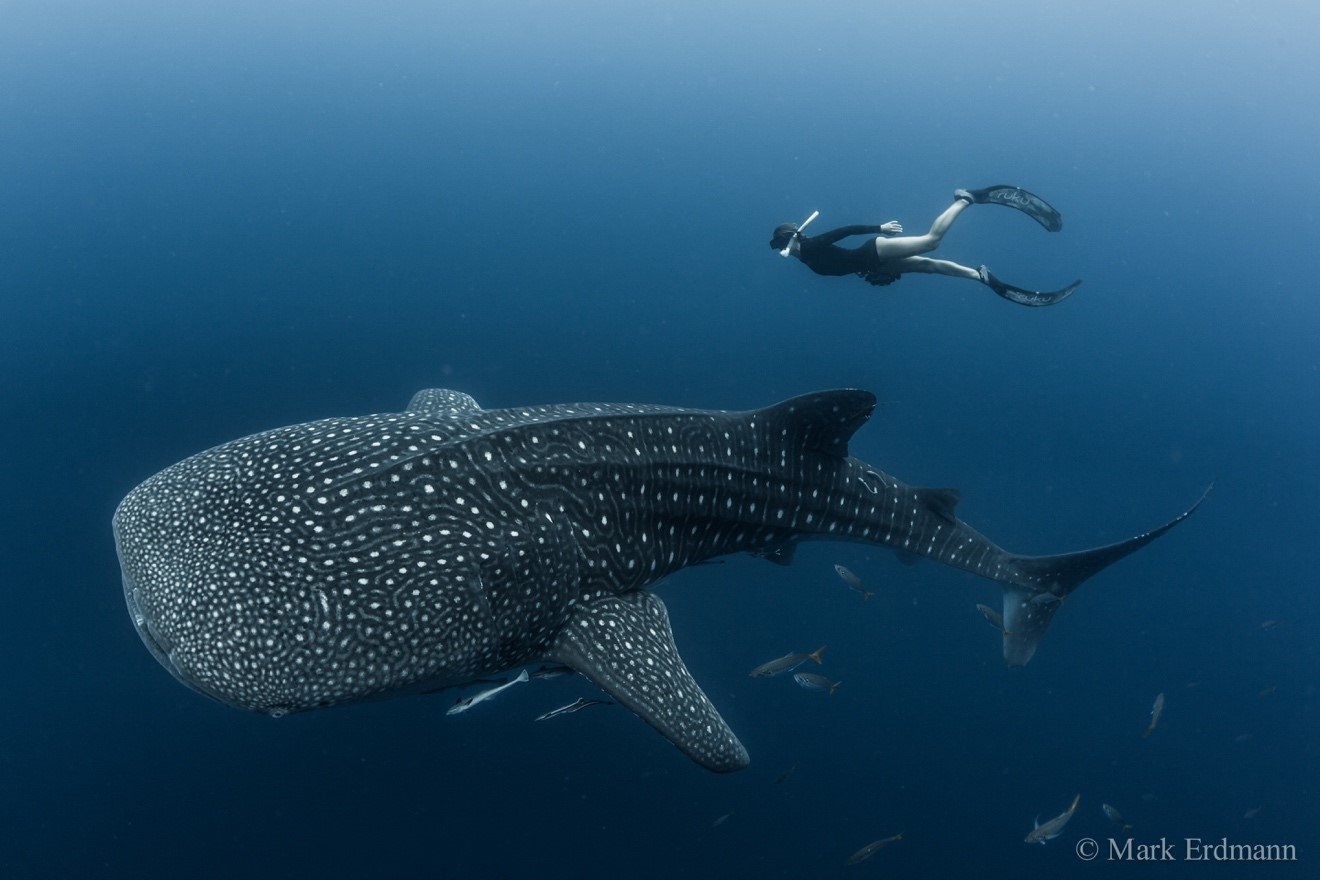 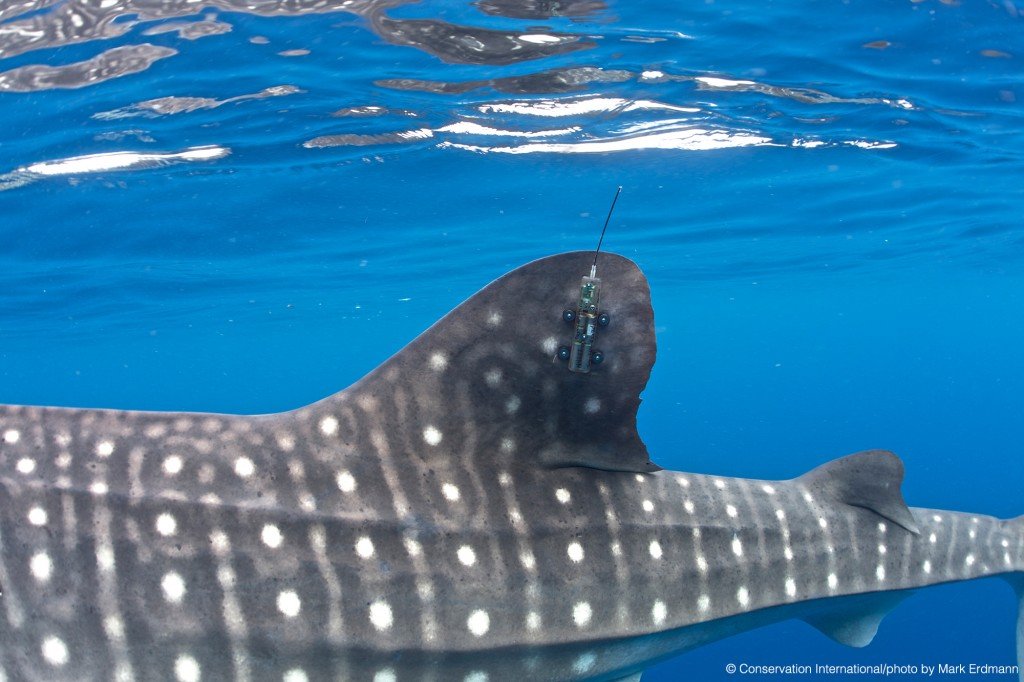 The 4.5m long whale shark “Sharky McSharkface” (who incidentally was named in a CI online naming contest) is now a world record holder for the longest satellite tag data series from a whale shark – his tag has been transmitting now for 25 months continuously, which is all the more impressive given that these satellite tags are outfitted with a battery pack designed to provide up to a maximum of two years’ of transmissions. During this time period, Sharky has been largely a homebody to Cenderawasih Bay – only venturing out of the bay for a short time in late December 2016. He has recorded some impressive dives of up to 1288 m deep during this time, however! Several other True North-tagged whale sharks have shown similar “homebody” behaviours in Cenderawasih Bay, including Yalgal, Barack, Ellula, and Mr. Casper.

Speaking of deep diving, 6m-long “Moby” recorded one of the deepest known dives for whale sharks (1856 m!!!) during his impressive travels north from Cenderawasih Bay to the southern Mariana Trench. Interestingly, he made this northerly loop between March and June 2016, then did a short jaunt westwards to Raja Ampat before returning to Cenderawasih Bay for about 8 months. In March 2017, he looked to be repeating his northern migration but has unfortunately not sent any further position data since that time! We note that another True North whale shark, Mitch, showed a similar track – heading north to Palau, then over to Raja Ampat and back to Cenderawasih Bay – and also hitting 1336m along the way! 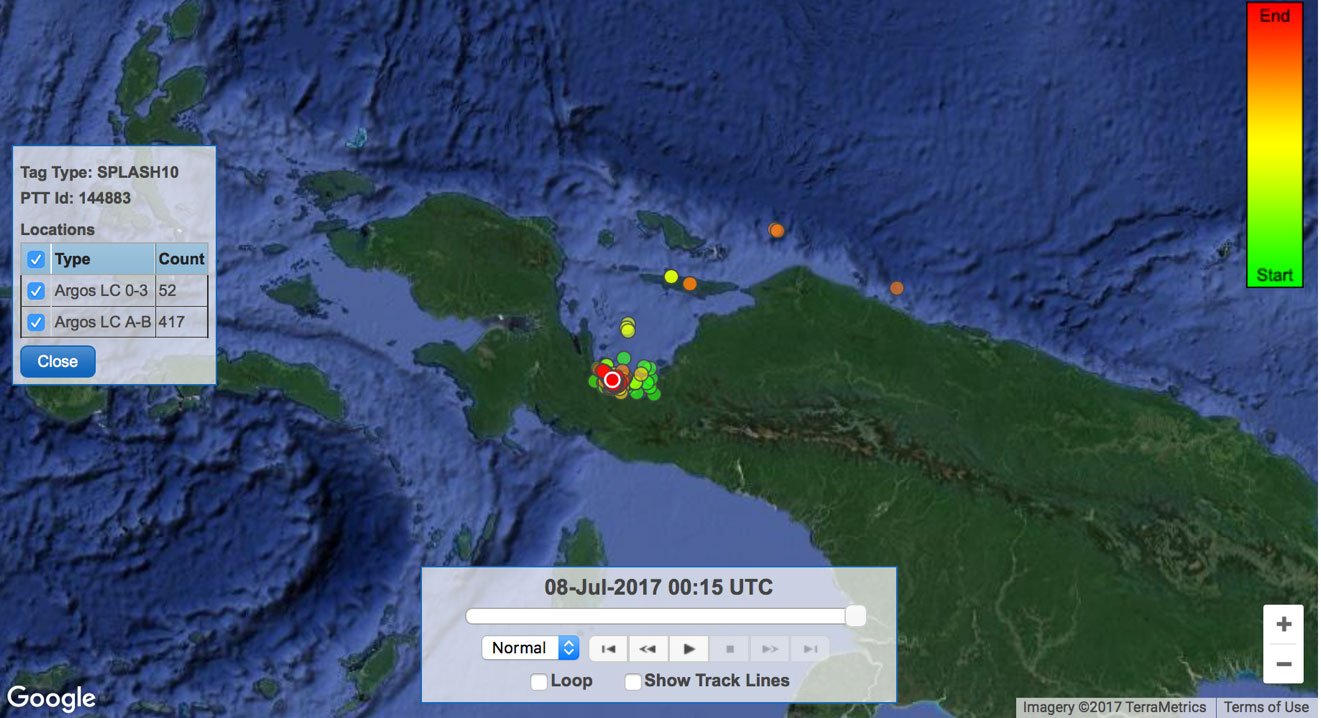 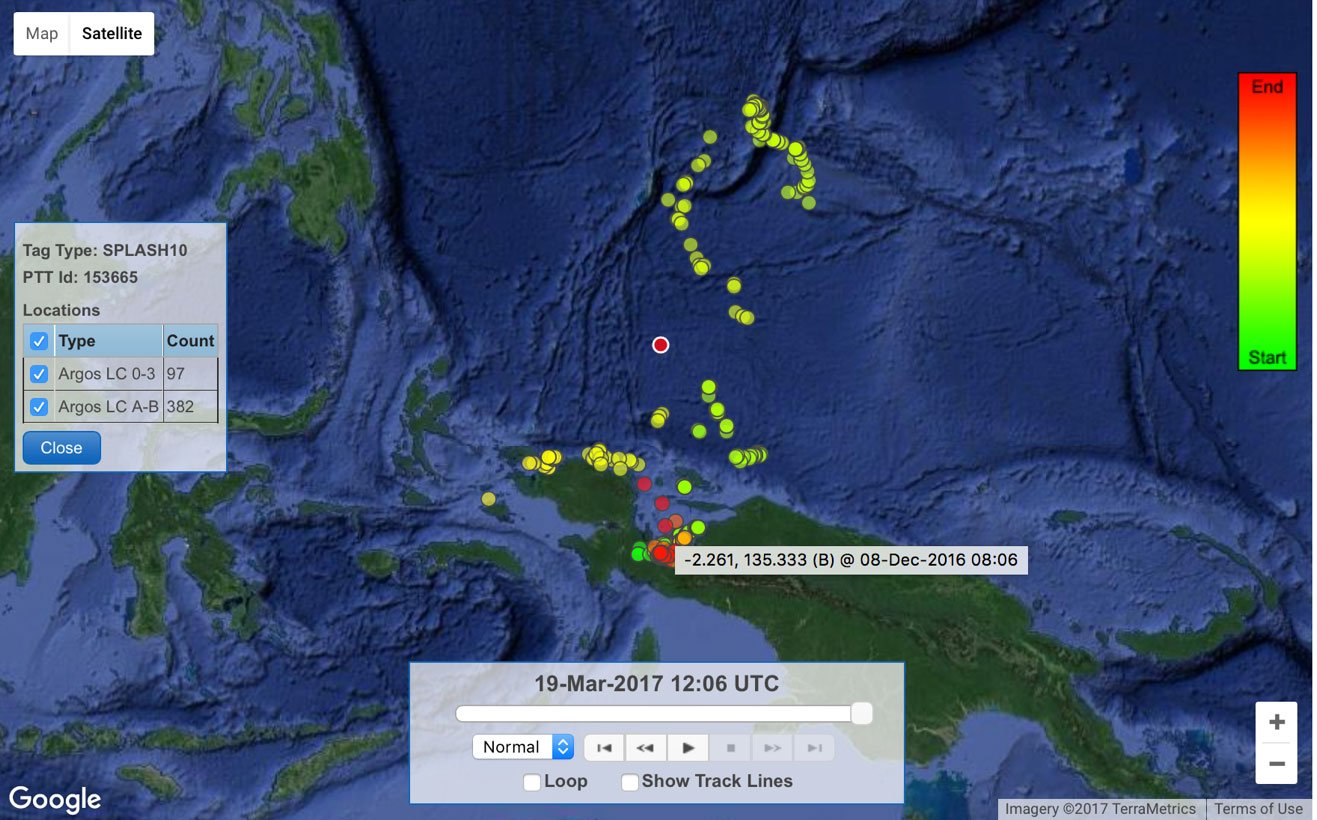 “Wally” (a 6m male) laid down a very unusual track during the 15 months his tag was active. During this time, he left Cendrawasih Bay and closely hugged the coastline of New Guinea, stopping for weeks at a time at the large river outlets he encountered along the way! All we can figure is that he was targeting the baitfish schools that tend to be abundant in the coastal waters off these big estuaries. He made it nearly as far as Wewak and the Sepik River outlet in Papua New Guinea, but then moved back and forth along the coastline repeatedly. He returned to Cendrawasih Bay for a short time and then back down the coast – clocking 3800 km during his 15 month travels.

“Muarwa Barnacles”, a 6m long male, was one of the first whale sharks we tagged in the Kaimana area in the southern Bird’s Head Seascape in February 2017. In the five months since he was tagged, Muarwa Barnacles has travelled nearly 1800 km while tracing a northern arc along the FakFak coast up to southern Raja Ampat (the same general route the True North covers during its Raja Ampat Explorer itinerary!) and then back to Kaimana. Along the way he’s dived to 488 m in depth! 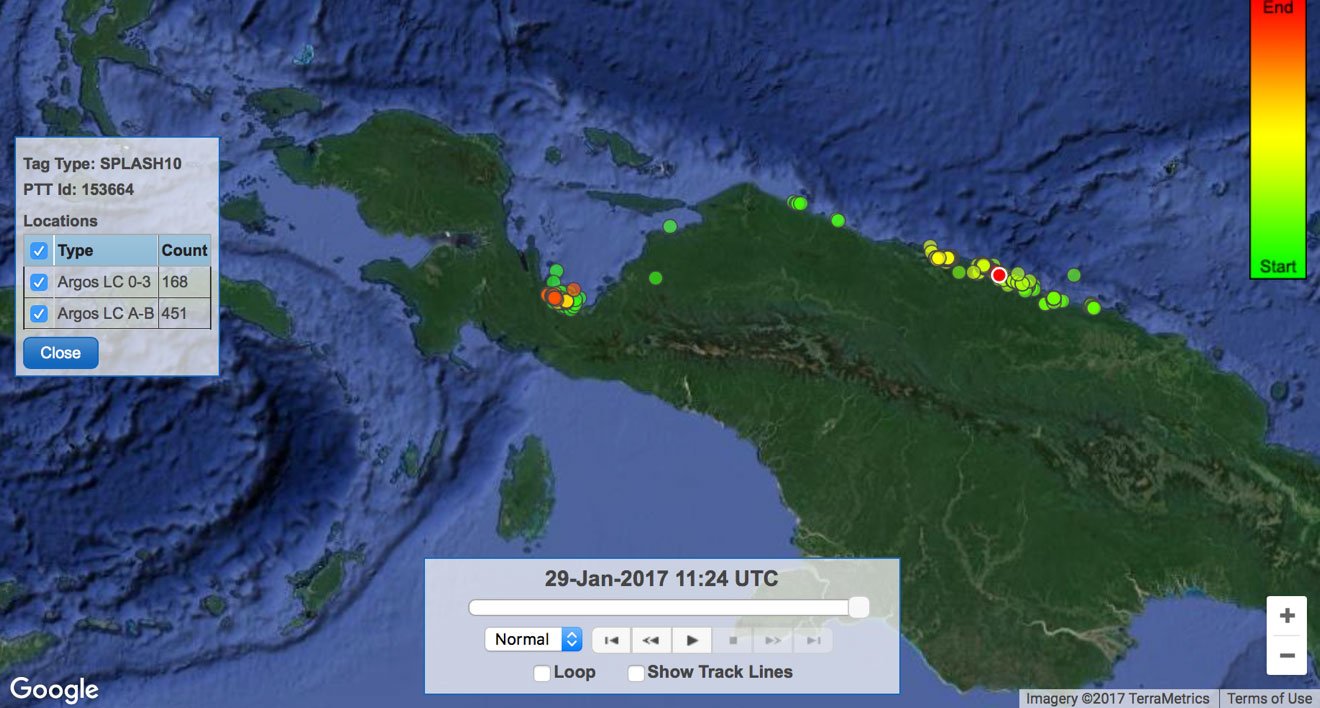 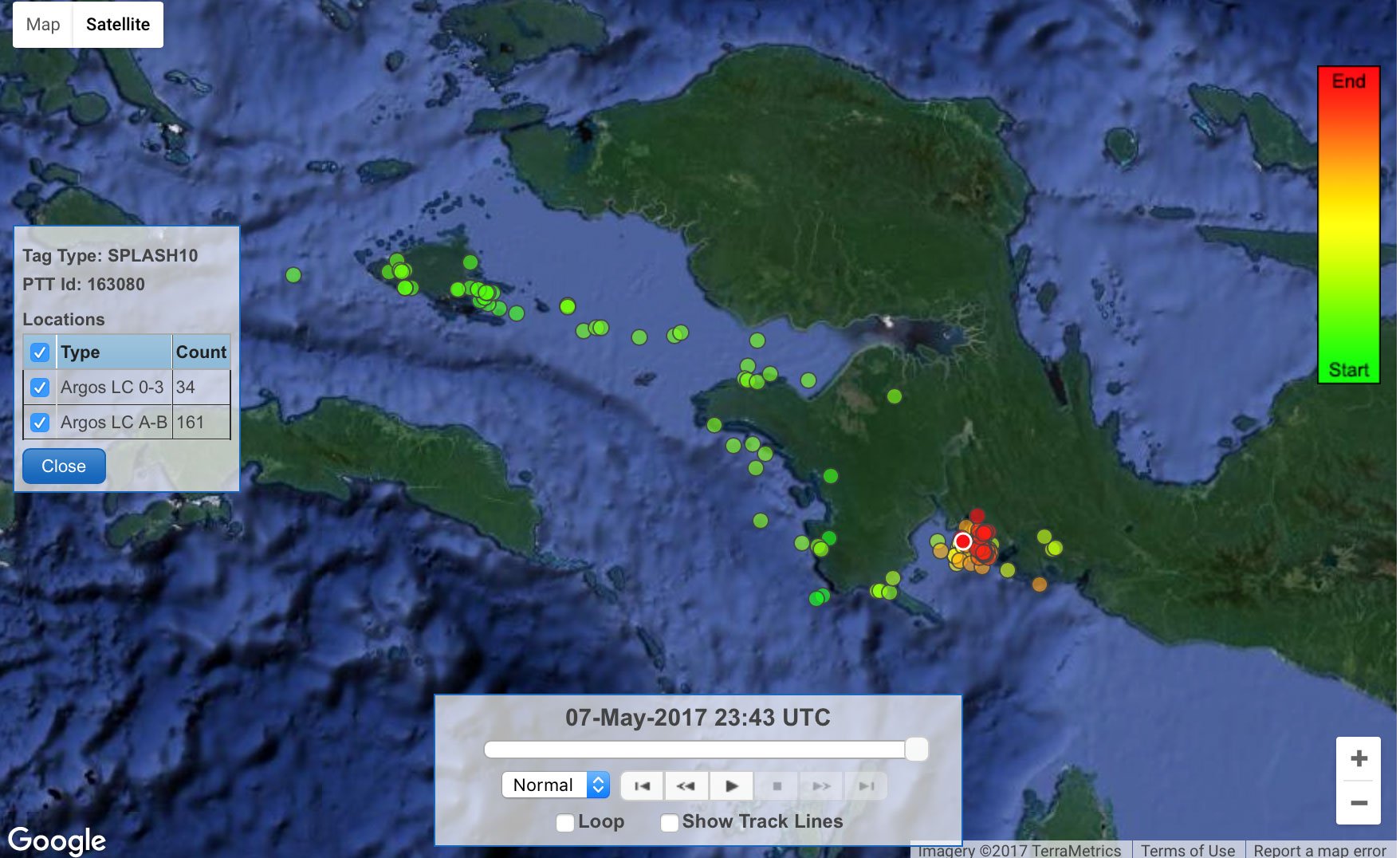 The international man of mystery

“Kodo” has won the contest for West Papuan whale shark with the most stamps in his passport – the 4m male swam northwest from Cenderawasih Bay into the waters of Palau, then visited Mindanao in the Philippines, then back down to Indonesia, into Australia’s Gulf of Carpentaria, and then back to southern Papua. He’s covered over 8400 km since being tagged in March 2016, and has spent the majority of the past 9 months in the vicinity of Merauke in southern Papua. This is particularly interesting given this is a mangrove swamp and mud-flat region – not the type of habitat we usually think of for whale sharks! We’re not exactly sure why he’s spent so much time in these shallow muddy waters – but presumably he’s found a food source that keeps him happy!

“Cheggers” was tagged in November 2016, and after spending a few months in Cenderawasih Bay, decided to take a long trek to the northeast. The 5.6m male has stayed mostly on the surface during his 2915 km swim over to Yap and Chuuk in the Federated States of Micronesia, though he did occasionally dive as deep as 1375m! 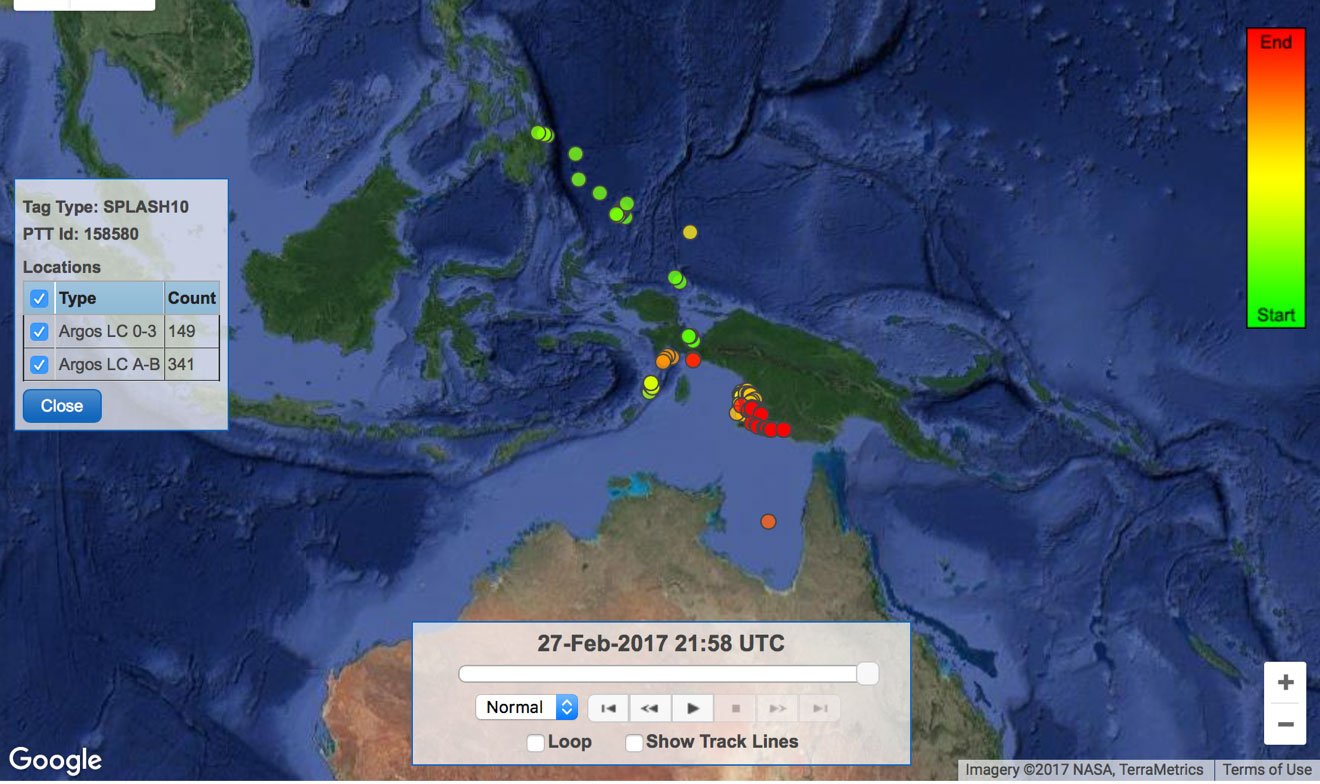 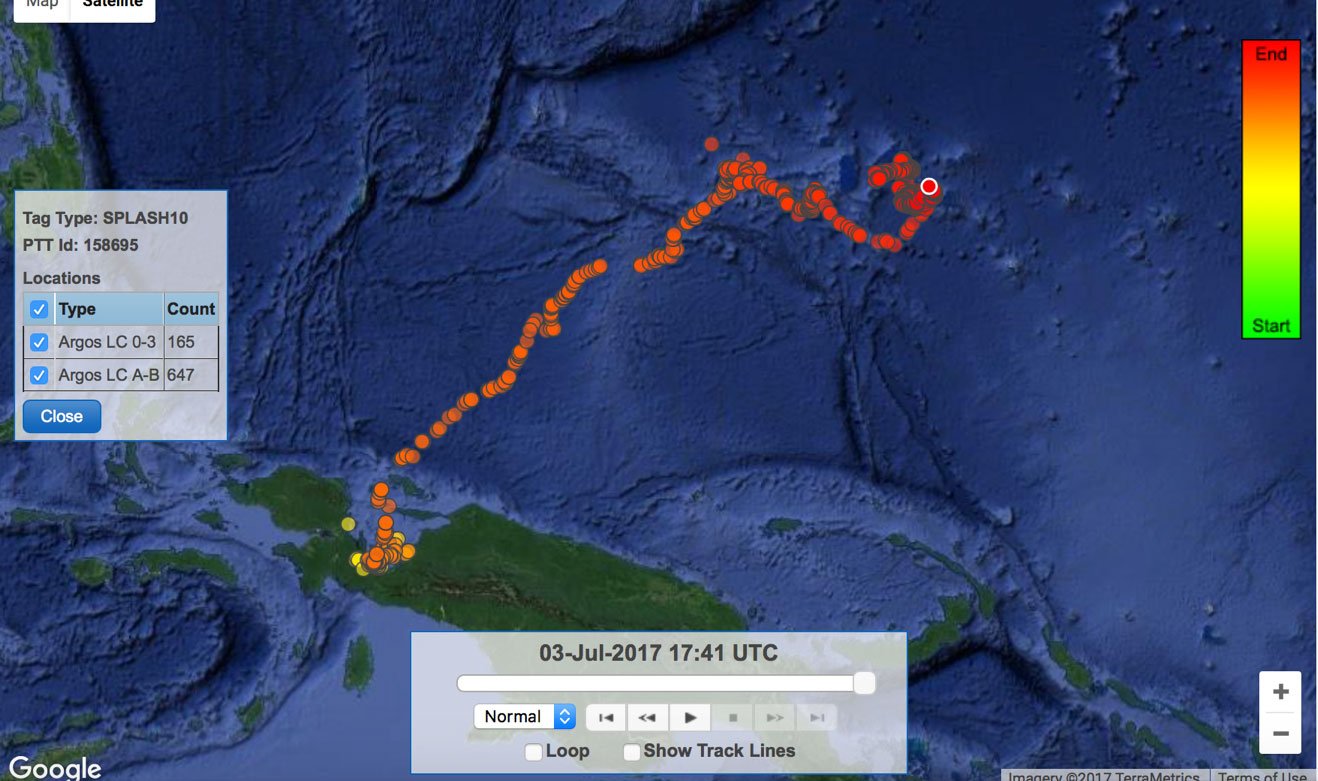 Interestingly, the whale shark with the longest track length is also one of the smallest sharks we tagged! “Fijubeca” was only 3m in length when we tagged him in October 2015, but since that time he’s travelled over 9000 km on a track which led him first north into Palauan waters, then east into PNG, then over to the Indonesian island of Sulawesi, and then back to southern Raja Ampat and the FakFak coastline in West Papua, where he’s spent most of the past year (with a short excursion south of the Aru islands then back to Raja Ampat). The little shark has dived as deep as 880m during his 21-month tag deployment! Equally as impressive, Fijubeca has visited eight of the Marine Protected Areas (MPAs) in the Bird’s Head Seascape during his travels!! This makes us particularly happy, as it indicates we’ve done a good job of siting these MPAs in areas that are important to marine megafauna migratory routes.

A look to the future

CI’s whale shark satellite tagging program has provided a wealth of unique insights into the secret lives of the world’s largest fish, and we are now using this information to improve the management of whale shark tourism in the Bird’s Head. Importantly, the satellite tracks we’ve recorded have also highlighted several regions of West Papua that are frequented by migrating whale sharks (eg, Mapia Atoll – also visited by True North!) that are now being considered for development of additional marine parks. In the near future, we are planning a major expedition in collaboration with the Georgia Aquarium and the Indonesian government to assess the health of Cenderawasih Bay’s whale shark population and specifically investigate whether current tourism practices are sufficiently “whale shark friendly” (as we believe them to be!).

We’re also very much looking forward to deploying a new set of satellite tags when the True North returns to Cenderawasih Bay in 2017. If you are interested in sponsoring a 2017 tag – stay tuned for more information from the True North team. And to everyone who has already supported the program, we extend our deepest gratitude and, we look forward to seeing you again on the mighty True North!

Mark Erdmann is CI’s Vice President for Asia Pacific Marine Programs. He is now based in Auckland after spending 23 years working in Indonesia. 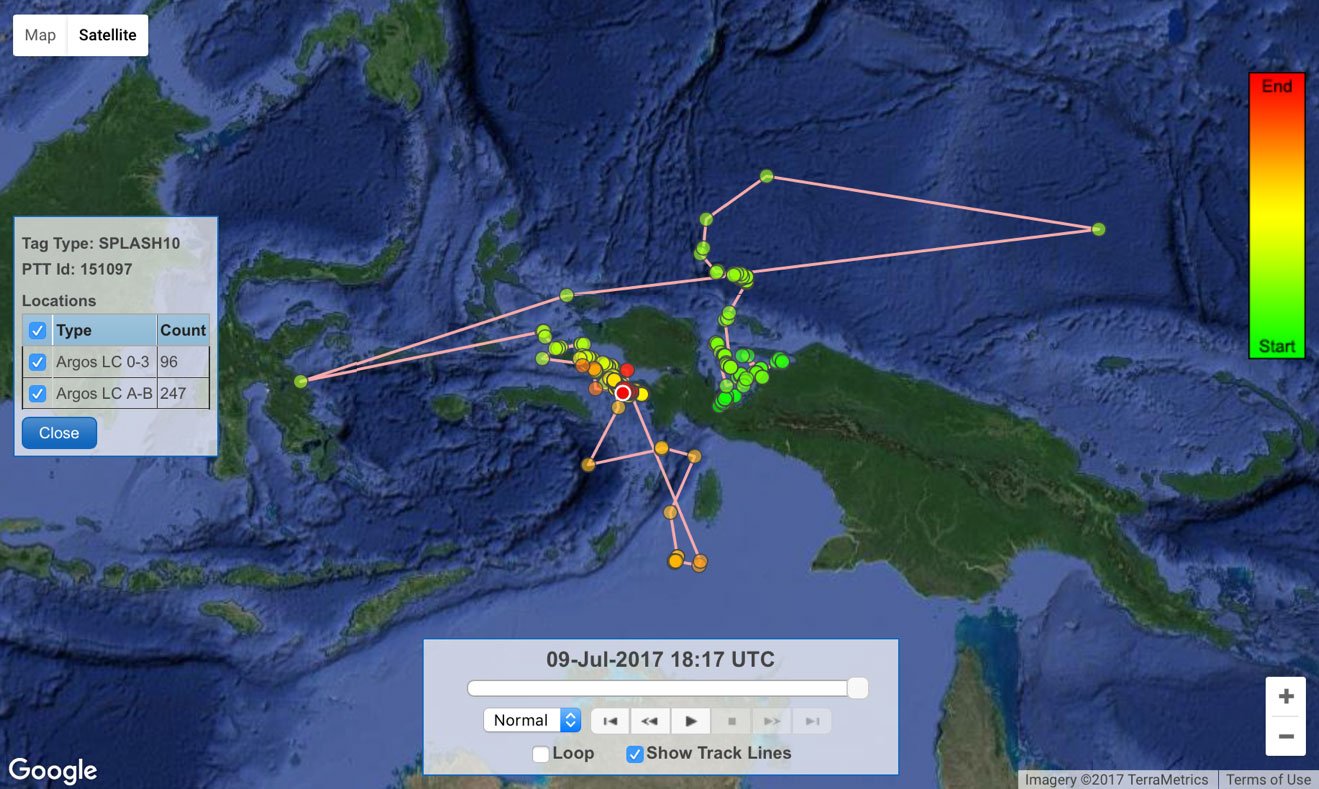 The Whale Sharks of Cenderawasih 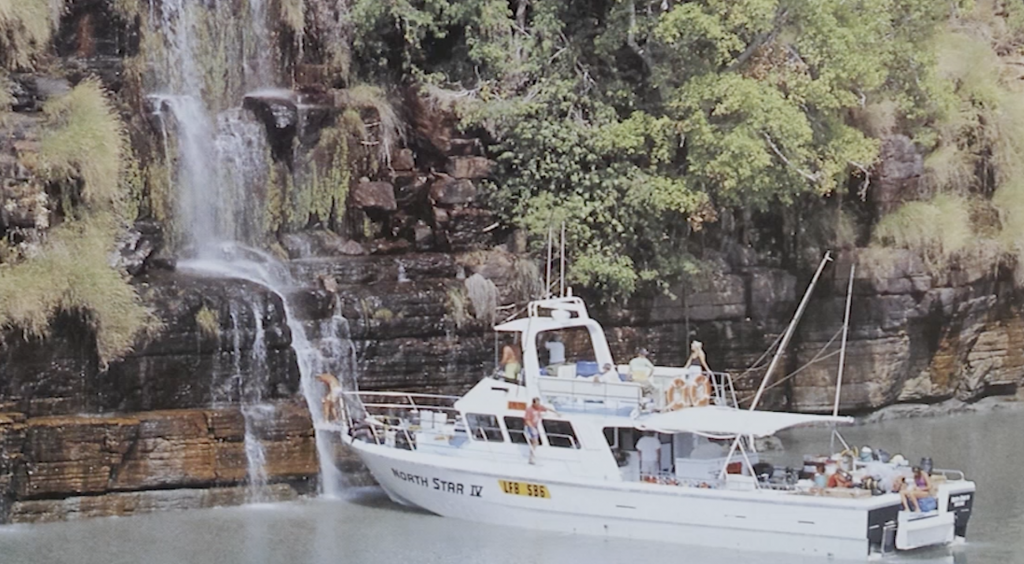 Why Rowley Shoals is a True North favourite

The TRUE NORTH first visited the Rowley Shoals way back in 1987. At that time very little was known about the area – the West Australian Museum had conducted a fleeting survey however virtually no one else... 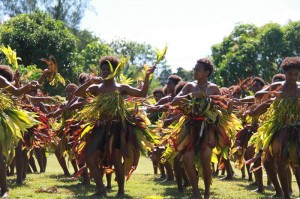 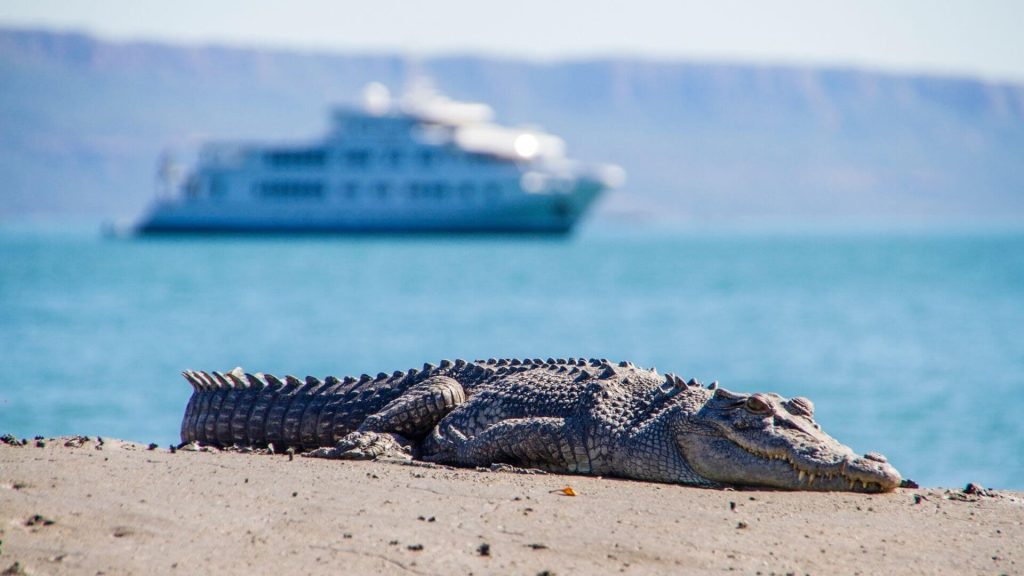