My favourite picnic spot in Australia is Melaleuca Falls.

Don’t pretend you’ve heard of it and there’s no point looking it up on Google Maps – you won’t find it. Even if you could pinpoint its location, the real challenge is getting there. In my case, this involved a two-and-a-half-hour flight from Perth to Broome, a three-day boat trip and, finally, a helicopter transfer from ship to shore. A complex itinerary, certainly. But also deeply rewarding.

A cascading waterfall that feeds a bracingly cool freshwater swimming hole. The paperbark trees – melaleuca – that dot the water’s edge.Souring columns of ancient stone, some of it as old as 1.8 billion years, some of it adorned with sacred First Nations rock art. It’s a view that feels like high-grade, uncut Australia: Waltzing Matilda multiplied by the Boxing Day Test. But more importantly, it reinforces the widely held belief that the Kimberley – a rigged 420,000-square-kilometre slab of stone, sand and scrub in Australia’s north-wet – is one of the planet’s last remaining wilderness areas.

Today, however, the wilderness is being conquered – temporarily, at least – as Melaleuca Falls plays host to the most Aussie barbecue I’ve been to since Triple J Hottest 100 pool parties were a thing. I’m one of about 40 revellers hooking in to a spread that includes juicy lamb chops, an all-time-great potato salad spiced with pepperberry and grilled Kimberley barramundi caught yesterday. Emboldened by prosecco from the open bar and the sight of young crew members doing bommies from the top of the falls, a trio of middle-aged women gingerly clamour up rocks and pin-drop into the water. Those on the shore clap and cheer.

“This is like the ultimate backyard barbecue!” shouts Jennifer, a rugby-mad Queenslander draped across a pool noodle floating in the billabong.

She has a good point. Everything in the Kimberley seems bigger, bolder and capital-B-Baz Luhrmann epic, from the skies and their hypnotic palette of blue, orange and magenta to the never-ending coastline of sand and stone.

But while the Kimberley’s reputation has been built on the blockbuster, its lesser-known attractions are equally valuable, as long as you know where to look.

Enter TRUE NORTH (truenorth.com.au), a 50-metre, 18-cabin luxury adventure ship. In both attitude and appearance it is to Love Boat-style cruise ships what the Batmobile is to family sedans: agile, packed with bells and whistles (satellite wi-fi, high-speed tender boats, a helicopter on the roof) and not interested in second place. It’s designed to explore smaller, shallower waterways bigger ships can’t operate in. Each day’s excursions – many of which involve climbing into said helicopter – are pitched at intrepid cruisers who believe in doing rather than observing. Much like the cruise company’s founding director, Craig Howson. “We charted the Kimberley by hitting every rock in the region by accident,” says Howson of his early days running charters in the area. “It didn’t always run perfectly but we got there in the end.” 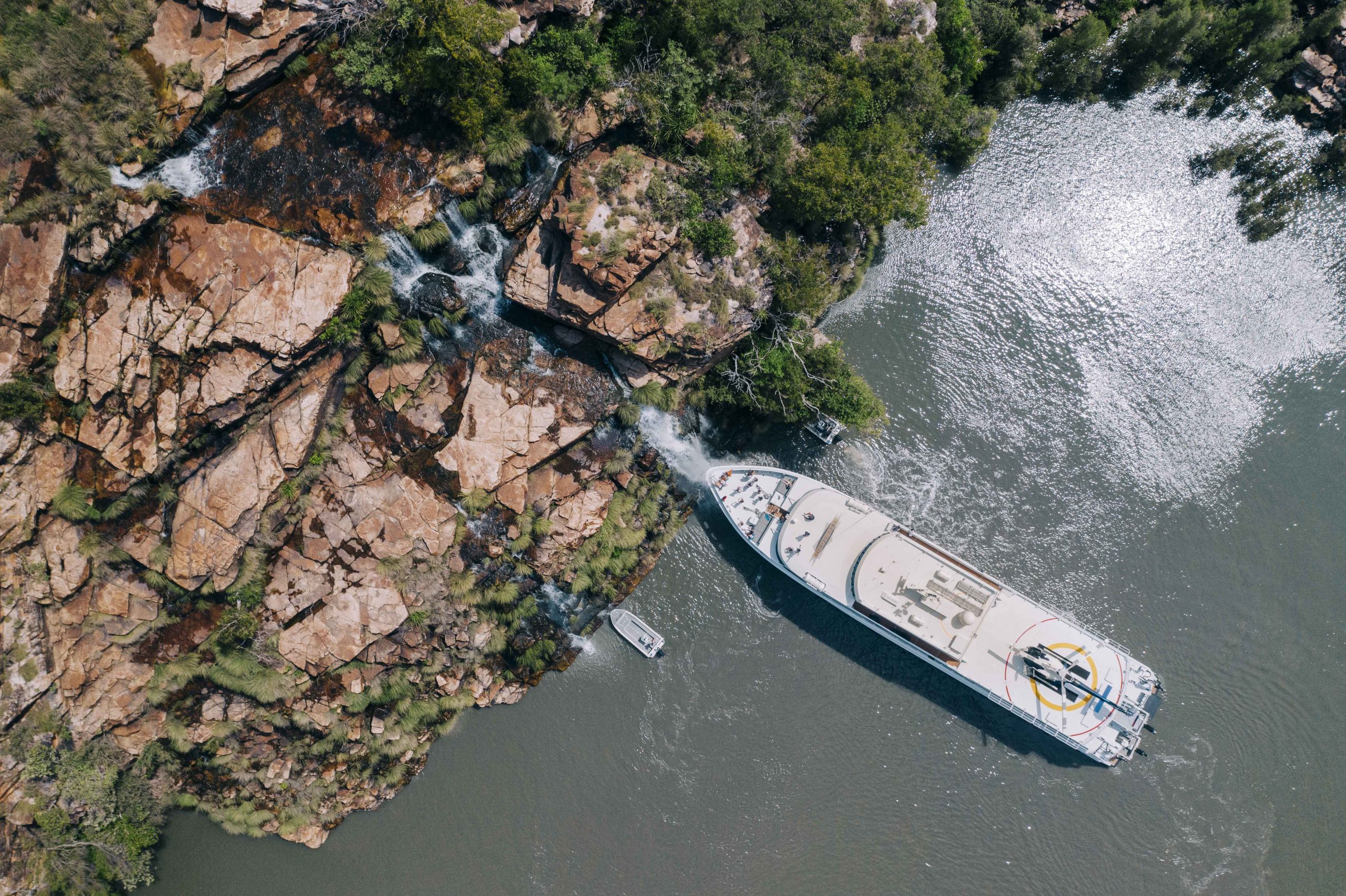 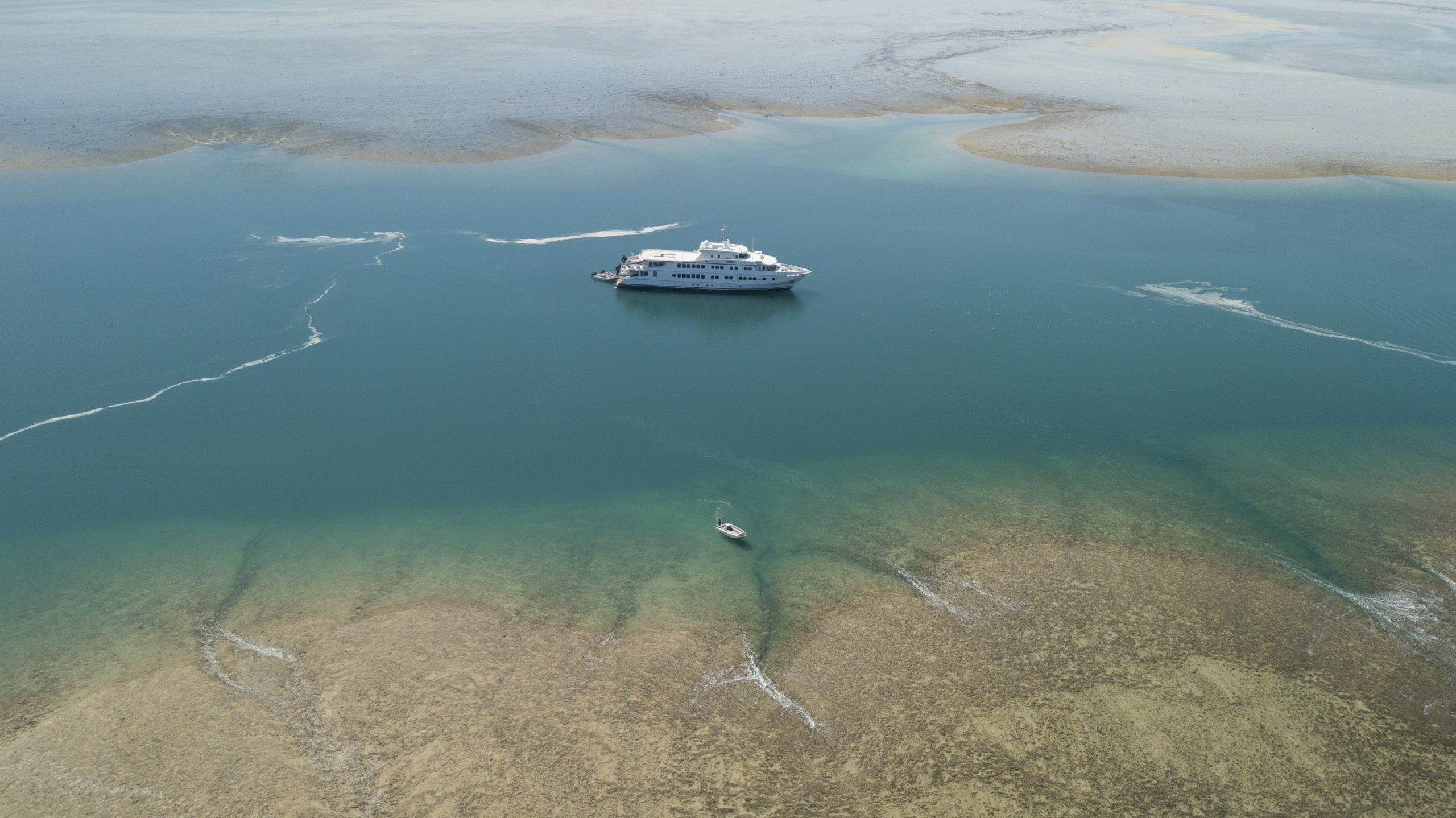 TRUE NORTH hosts a variety of journeys, with the seven-day Kimberley Snapshot between Broome and Wyndham its most popular itinerary. My trip begins at Broome’s Gantheaume Point, where smiling crew help guests aboard the aforementioned tenders and whisk them from beach to boat. Welcome drinks, canapes and primetime views of the setting sun make a fine introduction to life at sea.

Equally likeable is the cooking of resident chef Zaki Anwar, formerly of Perth’s loved Middle Eastern bar and restaurant Bivouac. Mealtimes aren’t just opportunities to fuel up on barramundi rillettes, spiced goat ribs and other big-flavour dishes; they’re also a chance to meet my fellow cruisers while breaking (house-baked) bread at communal tables. I talk agriculture with cotton farmers from the NSW Riverina and hospitality with a Sydney publican, while cooing at the story of the two octogenarians who are tying the knot later in the year but treating the cruise as a pre-wedding honeymoon.

Just as the landscape is quintessentially Australian, so, too, in the cruise, from its no-shoe policy to a DIY tea and coffee station stocked with Monte Carlo and Scotch Finger biscuits. At the midweek fancy-dress party, someone combines a Batman costume, blonde mullet wig and a can of Emu Export from the captain’s private stash to create a distinctly Aussie superhero, Bruce Wayne-o. Crew sporting healthy tans and strong accents speak with a disarming matey casualness.

“You go and enjoy your swim,” says Nat Hill, the ship’s naturalist, as we arrive at Silica Beach, the first official excursion of the trip. “We’ll keep an eye out for salties. They’re everywhere up here.”

Salties – saltwater crocodiles – are part of the Kimberley life. In typically irreverent style, the crew has a crocodile hat that it awards to the first passenger who spots a croc each day. None on day one, thankfully, but the scaly creatures do make (non-life-threatening) cameos throughout the cruise. We’re constantly reminded to keep arms and legs inside boats and to assume any floating log is actually a croc playing dead.

The afternoon’s foray to Horizontal Falls serves as a dynamic show-and-tell for another Kimberley signature: massive, fast-moving tides – the largest in the Southern Hemisphere. As water gushes in and out of two narrow gorges, it creates the illusion of a waterfall crashing across rather than onto the surface. It’s a twice-daily phenomenon that photographs beautifully from the air but is best enjoyed in a boat skipping through the spray.

The next day I witness the tides in a different yet equally awesome manner at Montgomery Reef, the country’s largest inshore reef. As water levels fall, the reef emerges, Godzilla-style, out of Camden Sound. Watching from a tender, I marvel at the mini waterfalls that appear across the craggy mass. Later, from up in the chopper, low tide makes it easy to spot the dark silhouettes of turtles and dugongs gliding through the shallows.

While these sea creatures are off-limits to eaters, the waterways are home to plenty of queenfish, mangrove hack, Spanish mackerel and other delicious edible varieties. Those how sign up for the daily fishing trip return to the mothership with stories for evening drinks and seafood that the kitchen transforms into dazzling sashimi and a restorative Thai-style fish porridge. I joined a group of fellow passengers using screwdrivers to pry palm-sized oysters off rocks and on our final night the spoils are served both raw and kilpatrick, along with steamed local mud crabs, chilled wine and sunset Leonard Cohen singalongs.

Water is everywhere in these parts. Even overhead. During the wet season between November and April, rain falls in short but intense downpours, detonating against the sea like a million tony bombs. Sadly, 2019 was one of the driest years on record and, by the time I arrive in August, the region’s much-photographed Mitchell and King George falls have stopped flowing. While lesser destinations would despair at such major draws sustaining season-ending injuries, the Kimberley has no such fears: my fellow day-trippers and I have the rare opportunity to scurry across the clifftops where the cascade would normally tumble and admire some of the planet’s oldest stone up close. Epic does seem to be the default setting in the Kimberley.

I don’t tire of the grandeur of the landscape and returning from ancient stone and technicolour skies to prefab concrete, 4G coverage, traffic and city living makes for a rude comedown. But after docking at the port town of Wyndham, the one-hour bus transfer to Kununurra Airport offers a final, longing glance at the Kimberley’s rugged majesty. Its red dirt, its knobbly boab trees and its Big Crocodile, a 20-metre wire and concrete sculpture outside Wyndham that confirms salties really are everywhere in the Kimberley. 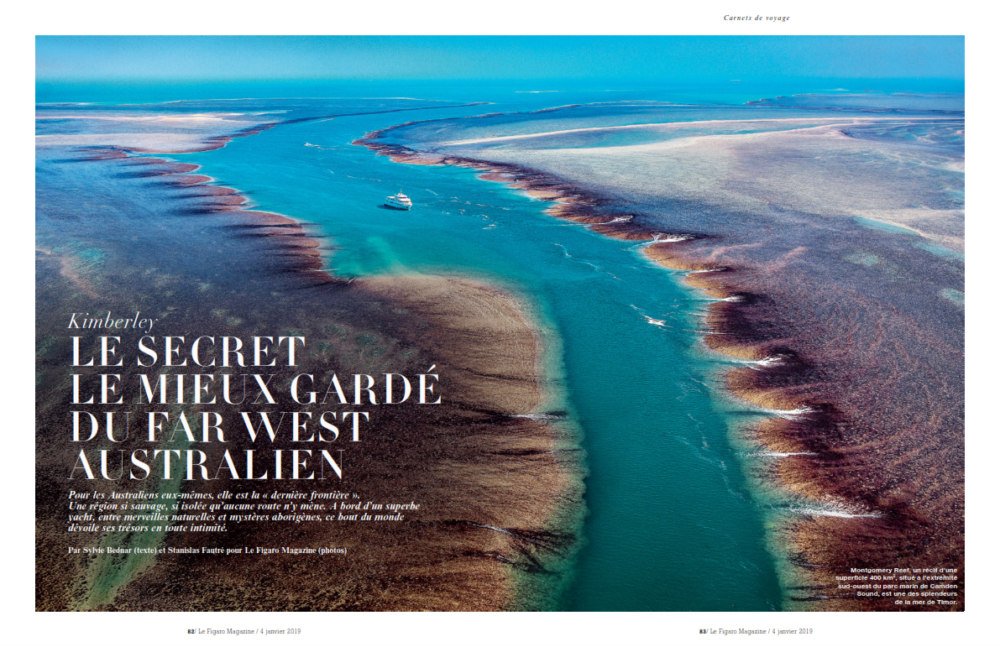 The Kimberley – the best kept secret of Western Australia

There is a black-and-white picture of Errol Flynn standing in a copra plantation in Papua New Guinea, taken in 1926 in Kavieng on New Ireland, an island at the northern end of the Bismarck Archipelago off Papua...